There’s a lot going on inside this device, which is why the prototype has a screen. The three main screens — meter, attitude, and info — can be cycled through while the amplifier is running by repeatedly clicking the rear switch down. 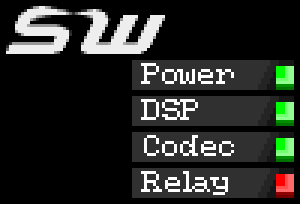 You will catch a glimpse of this every time you turn the unit on and, if all goes well, it will disappear almost immediately. This screen shows the device going through its power-on sequence. Red means ‘error’ or ‘not yet done’ and green means ‘OK’. The squares on every row should turn green in sequence within the first few hundred milliseconds. If one gets stuck on red, and you find yourself looking at this screen for longer than about a second, there’s a problem that you need to speak to me about. 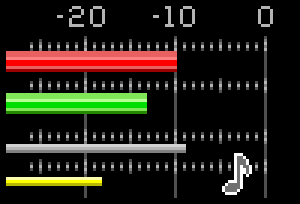 The scale is in dB FS (decibels with respect to the full-scale digital level). This means that the device will clip when the left and right meters hit zero. You should set the input level to the amplifier, if you can, so that the maximum level is a little under 0dB FS. 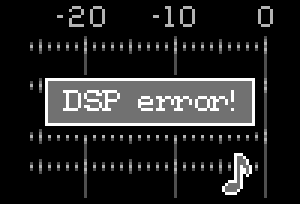 If the meters aren’t working and the screen says ‘DSP Error!’ (as above), it indicates that the sound level data isn’t getting to the display because the DSP firmware has probably crashed. You may need to re-attempt an upgrade. You should not see this message unless you’re me. 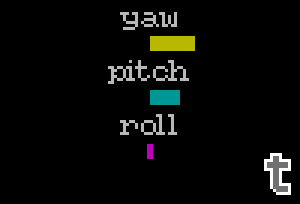 This was a placeholder screen until I developed a prettier one. It just proves that sensible head tracker data is coming through: the bar graphs will fluctuate gently as you move your head. 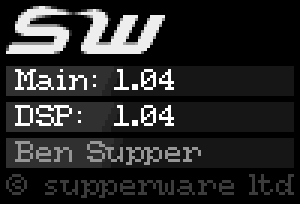 The screen handily reminds you what your name is (it will appear instead of mine), and tells you the currently-installed versions of the main and DSP firmware. 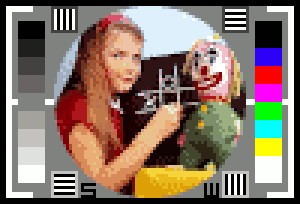 You will see the bootloader screen only if you are actively upgrading the amplifier. See the section below on updating firmware.

Should anything go wrong during the upgrade process, the unit might play dead, or show this screen when you turn it on and refuse to do anything else. If this happens, it’s pretty-much-always possible to recover by activating the bootloader manually. Again, see the section below on updating firmware.

If you have been used to the software simulation for the last eighteen months or so, I have remodelled the listening environments. They are more distinctive, and the quality has been greatly improved.

Provided the front panel is showing either the meter or attitude display, an icon in the bottom-right-hand corner of the screen will tell you which listening mode you’re in.

The differences between the modes can be most starkly compared by unplugging or muting one of the stereo channels, and playing speech through the other one.

Plugging in a head tracker

The USB port on the front of the unit is for plugging in a head tracker. The amplifier will work without it, but the simulation will stay centred and will not, of course, respond to your head movements.

This amplifier cannot charge or communicate with anything other than an Issue 3 or Issue 4 head tracker, and it’s not recommended that you try plugging anything else into the USB socket to test this statement. Bad things are very unlikely to happen, but I wouldn’t want to take responsibility.

You’ll know if you have an Issue 3 head tracker because I’ll have provided it especially for this purpose. Issue 4 head trackers don’t yet exist, and won’t exist until July 2020.

If your head tracker is successfully connected, a ‘t’ icon will appear alongside any others on the bottom-right corner of the screen:

The ‘attitude’ display will also update dynamically, to reassure you that the head tracker is working. To zero it (in other words, to centre it when you’re comfortable with your head position), either press the button on the head tracker itself, or flick the rear switch up.

Occasionally I will publish a firmware update for these boxes. You will need to connect the Micro USB socket on the rear of the amplifier to a PC or Mac. Instructions for downloading and using the update will be provided on another page.

It is recommended that you unplug your headphones during a firmware upgrade, or at least take them off. There is sometimes a ‘pop’ when restarting after an upgrade that can be fairly loud.

It’s almost impossible to brick a unit by messing up a firmware update, but you may render the unit apparently inoperable. If this happens, turn the amplifier off at the power switch, and hold the front switch down as you’re turning the power back on. You should see the bootloader screen, and this will enable you to try the upgrade again.